Alright, this blog is kinda blah now.. I need some zest or pizzaz…something!

Anyways here are the deals!

I really didn’t find walmart and zellers and zehrs to be any good..for me anyways….

Christmas is over! I am relieved! It gets so busy during the holidays, and now I am ready to get into my routine again!!

some good deals out there! Hope everyone has a awesome new years! Be safe!!

Another week down! 16 days until Christmas! :O

all the other stores i didn’t think they had great deals…sorry!

Can you believe its December?! Holy crapola! Christmas is going to creep up on us so fast! Thankfully I am all done my shopping 😉

Here are the deals!

Zehrs(no tax the 3rd only!)

It feels good to be back, and getting back into a routine!

There you have it! Remember to price match if you can’t get to all stores!

So this past weekend, I went shopping in Grove City and Erie, PA!

It was my first time going, and I already told my aunt (she organizes them) that I want in for next year!! Our first night we got there around 9pm, and decided to head to walmart because its 24 hrs! So they didn’t give us a lot of time, only a hour to look at walmart (would have loved to be there longer) I didn’t look at all the aisles like I wanted to, but I noticed they pharmacy stuff like bandaids and body washes were pretty cheap! A box of bandaids can be up to $5-6 here, and they were $2-3 there! Also they had these massive bottles of Dove body wash, like the huge sizes costco sells for $5 and change… their small bottle at walmart here is almost $5! I checked out the sheet sets as my son needs another one, and oh my this was my “wow” factor! He has a Cars comforter which is about $49 here and they sell the exact same one for $23!!! and the sheets were $39 here and $15 there!! Just totally ridiculously cheap!! Also some toys were only a little bit cheaper- my mom got my son a shake and go car and she paid $13 and here they sell for $17 ish! So thats all I had time for in walmart, quite sad… I would have loved to stay longer there!

Our second day, we headed to grove city where the outlets are, and OH MY!!! If you have never been there this place is massive, just store after store… Its all outdoors, in about 5 little strip mall type of strips… they have a ton of stores…the first store I went into was called Kirklands- this store is VERY VERY dangerous for your budget/credit card! It is like a home furnishing store I guess, They had wall paintings, wall metal art, frames, christmas decorations, those sayings on a plaque, everything you can think of!! Thankfully I had a $25 off coupon which helped! I snuck out of that store with a stocking holder( we don’t have a fire place) and 3 metal flower art pieces for my bedroom- they had so much more that I wanted, and I could have easily spent $200 there! They did have a coach outlet as well, but I found it sucked-big time! I didn’t even get anything! I feel Niagara falls has a way better one! I went to Reebok and got 2 pairs of shoes for $58! love the no tax!! I also got 2 hoodies and 2 t shirts from Aeropostale  for $47! again loving the no tax! And I ton of clothes for my trip(this friday!) from Old navy- 6 t shirts, 2 tanks for $35 again loving the no tax!Bath and Body works is so much better down there!! their soaps were 6 for $20 and I highly doubt our stores here would have deals like that! I went to  a few other stores, but overall there were some good deals!

Our last day we went to Kohls, Target, Marshalls, and Millcreek Mall. I have never been into a Kohls before… its kinda like a fancy and better winners with a hell of a lot more selection!! I ended up getting fila work out pant on clearance for $11 Reg $60 and work out capris for $12 Reg $50! I also ended picking up two t shirts for my hubby and a cute pair of flats for me for $24.99! My bill said I saved $94!! crazy!! Target is EXACTLY like Zellers, maybe a tiny bit better… same cherokee labels… I only got a christmas table cloth because I had a coupon for it… I paid $7.99- walmart has the same one for $14.99 🙂 Now on to marshalls- this is like winners…literally… I only got a small duffle bag there, but they had some good prices on shoes- I also checked out their luggage and I am so mad! They had this awesome pink hard case luggage the large sized ones for $66!!! that would easily cost $100 here!! that was a big GRRR moment!! Now onto the mall…it is a small mall… probably could do it in about 2-3 hours… but they have some nice stores there- charming charlie’s is a accessories boutique…literally front to back of head bands, necklaces, rings, earrings, etc.. I didn’t buy anything here as I can’t wear that stuff to work, but a lot of the ladies bought a ton of stuff there….then they had jcpenny, macys, burlington coat factory and a few other stores… but I was so exhausted I went back to the bus and relaxed….

Overall- great deals, great prices of some things! I would do it again, but I would also like to see some other outlets in different cities… I would tell anyone to go if you haven’t as its a great experience!

I will take pics…but its such a hassel to upload it to here so I will upload it on my FB page!!

I forgot how to do screen shots! so I took pics of the winners! Please email me you address’ ASAP! I would like to get these envies out tomorrow! -> stephaniemfinch@gmail.com 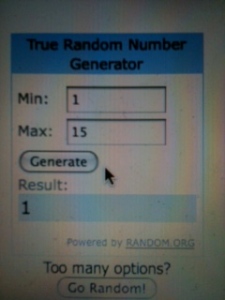 So we are less than TWO months til Christmas! Thats really sucky!

I love Christmas, hate the shopping! This year I have made it my goal to be done shopping EARLY

I have about 80% of my shopping done, and I did it frugally (is that even a word?) lol

I bought clothes on clearance/end of season for my niece and nephew. I also got some great outfits at Value Village or Talize. There is always a stigma with Christmas, that things need to have tags on it. I found this gorgeous pink addidas track suit for my niece, it is in excellent condition, and it was $5.99 so of course I got it ( I asked my sister in law first though if it was ok to get clothes 2nd hand to give as gifts) For the short amount of time that kids wear clothes, why wouldn’t you get used clothing? You will notice a HUGE savings!!

I bought toys on clearance or from an outlet! I recently got these two wrestling belts on clearance for $2.04! I saw the exact same belts at Zellers for $34.99!  Can I get a “HOLY CRAP!” I also got a crayola chalk set on clearance for $1.02! Not bad considering I have seen the same thing being sold for $10.99! Every year we check out the samko and Miko toy outlet, they have a great variety of colouring materials, books, and toys. We got my niece a few barbies, and I think we paid about $10.00 for each one, and we say the same ones being sold for $24.99 at Zellers! We also got a ton of books at the S&M outlet for $1.00- in my opinion, you can never have enough books!

I also noticed yesterday that Zellers (laurentian location) had a whole aisle for last years christmas decorations, it was all 50% off or higher! They had awesome decorations!! Worth a look if you need that type of stuff. I usually get my stuff on Boxing day! DH and I have been going for years now and I love boxing day shopping! I love getting up early and getting deals! call me crazy!! Last year we were up at 3am! We hit Old Navy at 4am and I got some awesome deals!

I am also going to the states for some cross border shopping next week. This will be my first time going! I am really excited! I started printing some printable coupons because I know we are heading to walmart, and a few other stores, so I wanna be as prepared as I can! lol

Alright, I think I have rambled on enough! There are ways to make the holidays cheerful without breaking the bank! I hope I have given you some ideas! Remember to check the clearance bins/aisle for toys/products!

I am glad to be back! Last week was just horrible with my son not sleeping! Now that it seems back to normals, here we go!!!

So my FB page recently hit 100 people!! I am so blessed to have people who follow me and my page/blog!

I just want to help people realize the awesomeness of coupons!

Anyways, here are the deets!

For the give away:

– I will leave it open until tonight at 9pm

– I will choose a 3 winners via random.org

– I will mail out the coupons ASAP